Oh, @!#?@! Q*bert was another one of those games that I had wanted for over a decade, but could never seem to track down locally or at a decent price. Unlike the inflated prices of games like Galaga and Ms. Pac-Man, however, Q*bert’s typically heavier price tag is at least somewhat justified. It’s a undeniable classic, but there just aren’t too many of them floating around anymore. The game is notoriously difficult to keep running, so many were converted to less problematic games back in the waning years of the arcade heyday.

In April of 2015, a collector in NM (1iblind on KLOV) who often travels to AZ, had one listed for sale. The sound wasn’t working (perhaps Q*bert’s most common problem), so it was priced accordingly. He and I struck a deal, and on his next trip out to AZ, he delivered it right to my door. Sweet!

Q*bert’s sound is one of its many charms, so getting that element of the game repaired was a top priority. A big shout-out to Alpha-Tron on KLOV for helping make that happen. He mailed me out a box of spare Q*bert parts, and via private message on the forums, walked me through diagnosing the issue. The problem turned out to be a faulty power supply. He let me keep his working power supply, and I mailed him back the broken one. All he charged me was the cost of the parts to fix the broken one that I sent to him. Classy guy!

I mentioned earlier that Q*bert has an infamous reputation as one of the more difficult games to keep running, and this machine proved that to be true on more than one occasion. Most recently, the monitor went out. I was playing the game, and all of a sudden, poof, there was no picture. Yotsuya from KLOV helped me fix that little hiccup at a local repair party. Q*bert is working 100%, for now, and this game is totally worth the trouble.

Q*bert is the @!#?@!  I remember reading that the game was designed specifically so that the player only needed to use one hand: enabling you to navigate the title character, while simultaneously drinking a beer. Brilliant! The controls are unique in that the joysick only moves diagonally, which works really well with the game’s isometric graphics.

Gottlieb, who was known more for their pinball machines than arcade games, creatively integrated a pinball knocker into Q*bert’s game play. If you jump off the edge of the pyramid, you’ll first hear the sound of Q*bert falling, followed by a simulated thud coming from the knocker installed in the cabinet. It’s a cool feature that adds an additional layer of fun to the mix.

My Q*bert machine was in pretty great shape, and featured the alternate “swearing” marquee, which can be purchased from Phoenix Arcade. It also sported a reproduction plexi bezel, which BretBMF from KLOV gave to me for free because he’s awesome like that.

As much as I loved having this game, I sold it in August of 22 in order to help fund the purchase of a Halloween pinball machine. 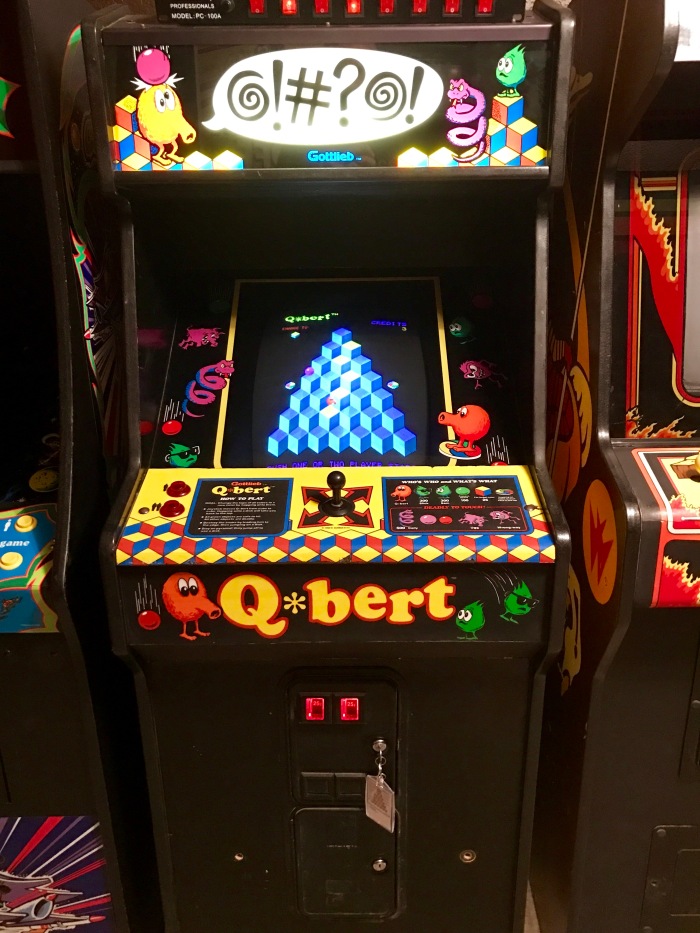 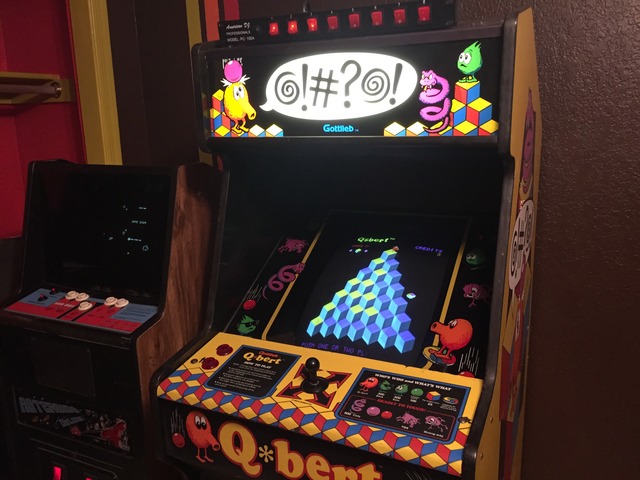