Back in the Summer of 2003 – right around the time that I picked up my first arcade game,  Berzerk – my friends and I went through a phase where we’d go to Castles ‘N Coasters in Phoenix on the weekends and play their pinball machines for hours.  I was itching to put a pinball machine next to Berzerk, and I quickly narrowed it down to three candidates: Creature from the Black Lagoon, Monster Bash, and The Addams Family.

Monster Bash was my favorite of the three, but it was also the most expensive, so I focused my attention on the other two.  It ultimately came down to whichever one I could find first at a good price.  As fate would have it, that turned out to be Creature, but I was still very much in the market for an Addams.

In late January of 2004, I came across an Addams on eBay that was misspelled “The Adams Family” (tip: I’ve found some great deals by intentionally searching for things by common misspellings).  Due to the spelling error, I suspect very few people saw it, because I scored it for a great price.  The game was located in Southern California, so a friend of mine who lives in the area picked it up for me and stored it until I could make the drive out there.

I drove home with the machine on Valentines Day, along with some “I’m sorry I missed most of Valentines Day weekend to pick up a pinball machine” roses for my girlfriend.

The Addams Family ultimately outlasted that relationship (my Valentines Day pickup was probably a bad omen), and followed me to my new house, where it remained the most popular game in my collection until 2012.  So what happened in 2012?

Well, as pinball prices were beginning to skyrocket, I knew that if I ever wanted to have a Monster Bash in my collection, the window of opportunity to do so without having to sell a kidney on the black market was quickly closing.  I found a good deal on one in Colorado, and the next thing I knew, The Addams Family was on its way out, and Monster Bash was taking its place.  Of all the games I’ve sold over the years, this was the toughest.

In December of 2016, however, I got a really cool opportunity to pick up over 30 games in Rodeo, NM, including an additional Monster Bash machine.  As I was driving home with a duplicate of my all-time favorite pinball machine, I thought, “How cool would it be to sell this Monster Bash and use the money to buy a really nice Addams Family?”  If Monster Bash ultimately caused the death of my first Addams, shouldn’t it bear the responsibility of bringing it back?  Well, that’s exactly what happened!

On January 23rd, the delivery truck pulled up to the house to drop off an absolutely gorgeous Addams that I purchased from a super-cool seller in Fishers, Indiana.

As soon as I got the game in the house, I installed a Color DMD (the LED version: which I personally prefer over the LCD version for machines from this era), mirror blades, a couple of mods, and changed up the LED scheme a tad by replacing the warm whites with cool whites and illuminating the THING ramp, vault scoop, and swamp scoop. 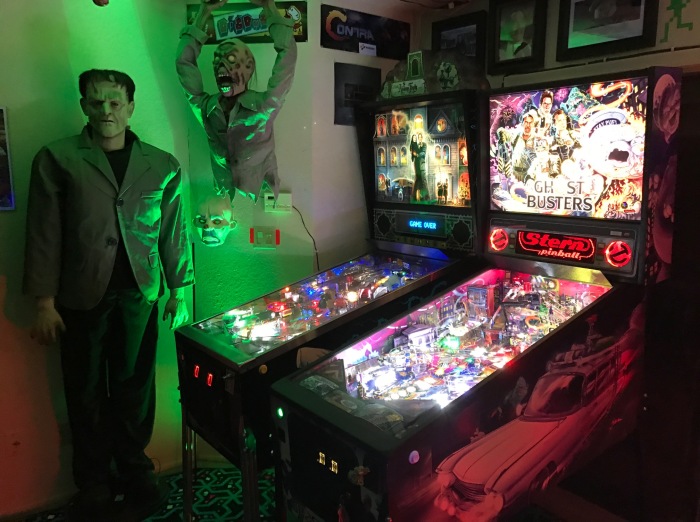 This particular TAF is in significantly better condition than my first one, and plays great!  Now that it’s back in the collection, I don’t see it ever leaving.  There’s a reason why this is the best-selling pinball machine of all time.  It’s got a killer layout, interactive toys, the voice talent of Anjelica Huston and the late Raul Julia, beautiful artwork, great music, and best of all: it’s an extremely fun game!